Zn-Zyme Forte ™ supplies 25 mg of elemental zinc per tablet. Zinc is a mineral essential to both normal health and to optimal cellular function. As a cofactor for an excess of seventy enzymes, zinc plays an important role in many cellular processes. Zinc is also a component of specific DNA binding proteins, known as zinc finger proteins, commonly referred to as zinc fingers. Zinc fingers are vital for nutrient/gene interactions. Consider Zn-Zyme Forte™ when a higher level of zinc supplemental is indicated.

Zinc is a mineral essential to both normal health and to optimal cellular function. As a cofactor for an excess of seventy enzymes, zinc plays an important role in cellular processes. The second vital function of zinc is as a component of specific DNA binding proteins, known as zinc finger proteins, commonly referred to as zinc fingers. Zinc fingers are vital for nutrient/gene interactions. For example vitamins A and D, as well as numerous hormones including insulin-like growth factor 1 (IGF-1) and growth hormone (GH) rely on specific zinc fingers to bind to DNA regions, which in turn effect the expression of specific genes. Functionally, zinc participates in cell membrane stability, and provides structural strength to bones, as it is part of the bone mineral apatite.

Zinc also affords many other immunological and host defenses. Thymulin, a thymus specific hormone, requires zinc for expression of activity. New protein production for tissue repair is a zinc dependent process, thus zinc status is particularly important in times of high tissue reformation, as seen in trauma and sepsis. In animals, a zinc deficient diet maintained for two weeks resulted in a severe impairment in the ability to generate a cytotoxic response to a tumor challenge, which was reversed with zinc administration. Immunological consequences as a result of deficiency are evident by alterations in numerous cellular types including a decrease in interferon-gamma (IFN-g), interleukin-2 (IL-2), and tumor necrosis factor-alpha (TNF-a), as well as decreased NK cell lytic activity, resulting in a decreased percentage of T cells. Zinc deficiency has been associated with both thymic atrophy and lymphoid tissue atrophy. Zinc is also an important component in blood sugar stabilization, as insulin production is a zinc dependent process. Structurally, insulin contains two to four zinc atoms as part of its crystalline structure, thus a constant zinc supply is essential for normal function. Furthermore, low zinc status has also been observed in women with osteoporosis and osteopenia.

Be the first to review “Zn-Zyme Forte ™ (Zinc)” Cancel reply 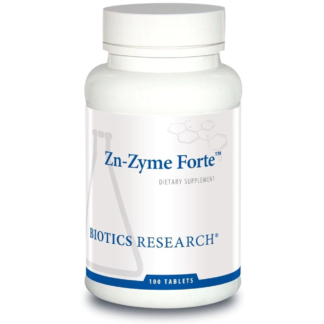